Black Friday Sales Are On! Article at a Glance:

All living organisms depend on the sun for nutrients, energy, and survival.  Within the sun’s spectral distribution, the sky-blue range of light is associated with circadian cues that help regulate hormones, mood, and your sleep/wake cycle.  But modern technology has increasingly moved society indoors where artificial junk light often leads to fatigue, stress, and poor sleep.  This calls for a new standard of lighting that harnesses critical sky-blue light to help keep you calm and focused during the daytime while also entraining your circadian rhythm.

What is healthy blue light?

Our eyes detect wavelengths of light between approximately 400-750 nanometers (nm). This is also known as the visible light spectrum.  Within this spectrum, blue light is defined as 380-500nm, which we can further divide into beneficial or harmful wavelengths based on how they affect our vision and health.  Healthy, signaling blue light refers to wavelengths from 460-500nm. (The harmful blue wavelengths live between 380-460nm.)

Why is signaling blue light important?

When blue light enters the eyes, it stimulates intrinsically photosensitive retinal ganglion cells (ipRGCs) in the back of the eyes and sends signals directly to the suprachiasmatic nucleus (SCN) in the brain.  Research shows that this signaling suppresses the production of melatonin (also known as the sleep hormone), which then promotes greater alertness, focus, and productivity. (1)

Our circadian system notably has its peak sensitivity between 460-500nm. (2)   Signaling blue wavelengths are critical for cueing circadian responses — like when to wake up, when to eat, and when to go to sleep. This is an evolutionary function that is hardwired into our DNA to help keep us healthy.

Toxic blue light (within the 400-450nm spike) can have adverse health effects, such as:

Most LED lighting technologies to emit large amounts of toxic blue light and have a trough signaling blue light spectrum.  As a result, they fail to communicate daytime accurately to our bodies and misalign our circadian rhythms.  The TrueLight® Luna Red® light bulb infuses healthy, signaling blue light to promote better energy, focus, and mood during the daytime. With that said, it is intentionally designed without a trough in the toxic blue region. This bulb is a simple yet effective tool for illuminating your home office without disrupting your sleep/wake cycle or leaving you with headaches and eye strain. It can be used in conjunction with or as an alternative to blue-light-blocking glasses.

That’s not all.  The TrueLight® Luna Red® isn’t just a daytime hack; it comes with complete day-to-night functionality that allows you to adjust the color temperature from 3000K to 1000K. This specific color range, combined with built-in dimming, provides ideal light exposure for both daytime productivity and better sleep at night. In other words, when you use the TrueLight Luna Red® light bulb, you have more control over the light in your environment.  The daytime and nighttime settings essentially mimic what you would otherwise be exposed to outdoors, and support your circadian rhythms, as nature intended. Article at a Glance: National Space Day was first created in the 1990s to commemorate all of the achievements associated with space research and exploration, 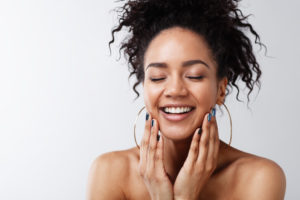 How to Boost Skin Health and Improve its Appearance

Article at a Glance: Skin is the body’s largest organ, and it’s important to protect it as much as it protects you. Maintaining healthy skin 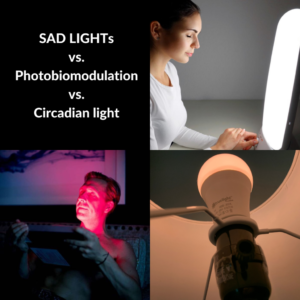 SAD lights, PBM & Circadian Light: What You Need to Know

Article at a Glance:  Light is an extremely powerful stimulant and tool for the human body. There are several types of light therapy and lighting